Supporting leaders for a changing church and world 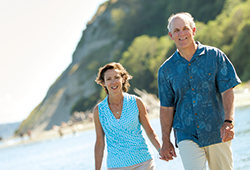 A few months ago, Jim and Felicia Lindus spent a week in San Francisco. As they walked the streets, they saw a number of churches with one shared characteristic.

"We saw these old churches that were the cornerstones of their community at one time," said Jim. "Now, those buildings are largely historical. They're surrounded by these big buildings, Starbucks, hustle and bustle. It's a different day."

Lindus graduated from Luther Seminary in 1986, part of the first class of the merger between Northwestern and Luther. He is now chair of the Luther Seminary board of directors and senior pastor of Trinity Lutheran Church in Freeland, Wash.

"The leaders we're producing at the seminary are coming into a church and society that would have been largely unrecognizable 40 years ago," he said.

But Lindus believes that, based on the way Luther Seminary is educating future church leaders, the church will thrive into the future.

"I think Luther Seminary has recognized that it is about leadership. Our programs have changed to focus on faithfulness and leadership, faithfulness to God in Scripture and focusing on God in the parish," he said. "I'm hopeful."

That hope recently inspired the Linduses to include Luther Seminary in their will.

"We've supported the seminary as we were able, year after year," said Jim. "But we believe the final statement we make in this life should be consistent with the values and priorities we held dear while we were here. I think that's an important statement to those who come after us."