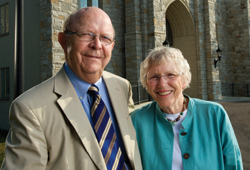 When Our Savior's Lutheran in Menomonie, Wis., wanted to award its departing pastor, Paul Roe, for his years of service, he decided to pass the gift on. Roe suggested the establishment of the Paul A. Roe Endowed Scholarship Fund at Luther. It started in 1987.

Paul graduated from Luther with no debt in 1955, when the church still covered the education of future pastors. While working for the Board of Pensions, Paul learned that the situation for students had drastically changed. "I was made aware of the large debt incurred by students, and they're going into a profession where the potential salaries are not that great," says Paul.

Paul and his wife, Donna, have set up four charitable gift annuities to grow the scholarship, so it will increase substantially in the future.

"We have a desire to support the integrity of Luther Seminary and the quality of its students," says Donna. Do you want to help relieve student debt? Contact us today.